The 2019 report Cannabis & Sustainable Development is available on ResearchGate, Academia, the Internet Archive, and FAAAT.net

During the past Century, policies on Cannabis have tended to harmonize on a global scale. The Cannabis plant and its derivatives are included in an international law framework articulated around prohibition – and “classified as harmful for health and with no scientific or medical value […] with insufficient scientific support to substantiate the decision, as credible evidence exists regarding the medical uses of […] cannabis” (E/C.12/GC/25). This has provided the basis for the diffusion and generalization of morality-driven Cannabis policies, in almost every country.

In 2020, relatively few governments and non-state actors deny the failure of this “war on drugs” approach to policing Cannabis and other psychoactive plants or substances. Even fewer of them advocate for its continuation. Accordingly, there is a shared, broad, and multi-stakeholder consensus: the world needs to rethink Cannabis policies.

After having justified the severe policy status applied to the Cannabis plant since the early design of current international drug policy in the 1950s, the World Health Organization (WHO), on the basis of an unprecedented evidence-based assessment undertaken between 2016 and 2019, now acknowledges the therapeutic use and potential of Cannabis and cannabinoids. The WHO recommends the international control over the plant, its components, and its medical preparations, to be lowered, and for red tape over the access for medical and research uses to be lifted (E/CN.7/2020/14).

Nonetheless, Cannabis and its policies are particular, complex, and emotional. They represent unprecedented and fundamentally multi-factorial issues. They require patience, and a holistic, enlightened and multidisciplinary consideration.

Because Cannabis provides this opportunity for systems thinking, a novel approach to its policies will not only be helpful for the plant’s related issues: it will help in redesigning drug-related policies as a whole, and it will also enlighten us to forge the necessary tools required to address the many outdated “non-Cannabis” and “non-drug” public policies that hamper the sustainability of humankind.

In an overconnected world village where the behaviour of our societies disrupts nature at its utmost point – from pandemics to climate change – the decade 2020-2030 calls for a renewed vision of, and connexion with nature. Cannabis and its policies are also a lever for that goal. Adopted by a consensus of all countries on the 70th anniversary of the United Nations in 2015, the 2030 Agenda for Sustainable Development (A/RES/70/1) is a global blueprint for people, planet, prosperity, peace and partnership towards 2030; a “historic decision on a comprehensive, far-reaching and people-centred set of universal and transformative Goals and targets.”

Cannabis, per se, is neither a problem nor a pressing issue. It is just a plant, yet interwoven into a million problems, and another million pressing issues. This makes the 2030 Agenda for Sustainable Development, and its million topics covered, a relevant matrix to analyse Cannabis and its policies.

Because of its characteristics, widespread cultivation and use, and the diversity of its applications, we found that the Cannabis sativa L. plant and its related policies directly trigger at least 64 of the 169 targets among 15 out of the 17 Sustainable Development Goals (SDGs) of the 2030 Agenda.

Sustainability and Cannabis policies also echoe 75 of the 104 operational recommendations of another important policy toolkit adopted by global consensus in 2016, the outcome document of the ‘UNGASS 2016’, the 30th special session of the UN General Assembly on drug policies (A/RES/S-30/1), which noted that “efforts to achieve the Sustainable Development Goals and to effectively address the world drug problem are complementary and mutually reinforcing”. The UNGASS 2016 outcome is organized in seven thematic chapters focused on prevention & treatment, availability for medical uses, illicit supply reduction, human rights, new trends, international cooperation, and development.Cannabis policies also affect – and are impacted by – a number of other domains of international law. It is the case in particular with recent instruments such as the Convention on Biological Diversity, the UN Framework Convention on Climate Change, or its Paris Agreement, but also with international health regulations and intellectual property agreements. Cannabis and its policies can also play a role in the ongoing priority working streams of the international community, such as the 2016–2025 United Nations Decade of Action on Nutrition (A/RES/70/259), the two 2019–2028 Decades: on Family Farming (A/RES/72/239) and the Nelson Mandela Decade of Peace (A/RES/73/1), the 2020–2030 Decade of Healthy Ageing (WHA69.3), and the 2021–2030 United Nations Decade on Ecosystem Restoration (A/RES/73/284).

Surprisingly, this plant virtually affects the Sustainable Development Goals both positively and negatively. And policies play a major role in determining which impact Cannabis has on our societies.

The non-psychoactivity-related uses of the Cannabis sativa L. plant – called “hemp”, “industrial hemp” or “industrial cannabis” in this context – have accompanied humankind over centuries, in particular for the provision of food from the seed (Goals 1 & 2) and through the numerous products derived from its fiber, among which, efficient building materials can be locally sourced and produced (Goals 9 & 11). More recently, the plant has continued to be explored for the soil-cleaning property of its roots, contributing to clean water and oceans (Goal 13). The significant biomass produced by the stems of Cannabis has revealed itself to be both a promising source of energy (Goal 7) and a renewable source of recyclable vegetable plastic (Goal 15), etc. Yet, not only the non-psychoactivity-related uses of Cannabis sativa L. can contribute to the efforts to meet these Goals. In addition, reforming the current repressive, prohibitive, and marginalizing policies concerning the psychoactivity-related uses of Cannabis sativa L. is indispensable to meet Goals 3, 4, 5, 8, 10, 13, 16 and 17.The laws, regulations, and policies on Cannabis provide the unprecedented opportunity to build, from the onset, “an industrial system that is restorative or regenerative by intention and design” – the definition of circular economy given by the United Nations Industrial Development Organization (MakingIt #27).

The reformist trend in Cannabis policy globally is an ongoing movement unlikely to be stopped. A deficit of democratic monitoring of the generalization of legal Cannabis markets could represent a threat to affected populations and public health. Ethics are needed. Renewed interest and takeover of the topic by all categories of the population are urgent.

A one-size-fits-all policy seems neither desirable nor possible, both for geographical imperatives and for the diversity of uses and products of the plant. This makes consensual Cannabis policy models (exportable and generalizable) difficult to emerge – and makes any attempt of an universal model, chimeric.

Rather than trying to solve the equation of the perfect Cannabis policy and its infinite variables, a more feasible approach would be to step aside, list all the different public policies that affect, or are involved with Cannabis, and address them individually while keeping their interconnexion in mind. The 2030 Agenda for Sustainable Development and its 17 Goals is but a perfect tool for this purpose.

The current document summarizes and highlights the most important intertwining between Cannabis, its policies, and the 2030 Agenda. The full, in-depth findings, were published by FAAAT in March 2019 and presented at the High-Level segment of the Commission on Narcotic Drugs of the United Nations –the main legislative body on international Cannabis law. The report draws on research and experiential outcomes from scholars, civil society organizations, affected populations, and market stakeholders. It seeks to show the potential of the Cannabis plant in appropriately regulated settings as transformative for our societies – so long as ethical practices and sustainable approaches are kept central. The 145 pages report, its 295 references, and other interactive materials in several languages are available on Research Gate and Archive.org This toolkit is not intended to be an exhaustive guide. It is designed as a valuable resource to contribute to post-prohibition studies. It wishes to help understand and discuss, from diverse public policy perspectives, the links between the policies of Cannabis and the Sustainable Development Goals, and the impact of the former on the latter. 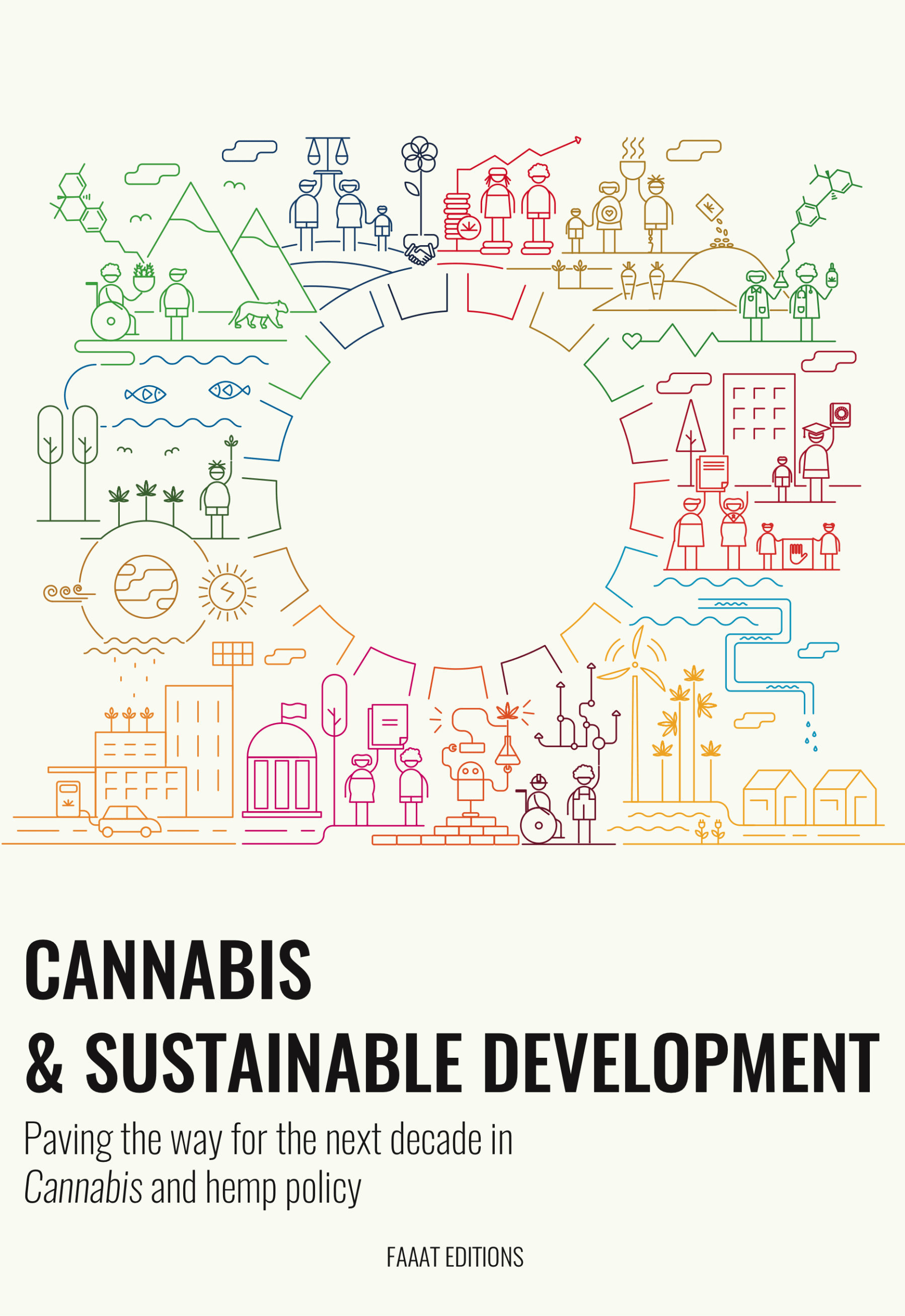 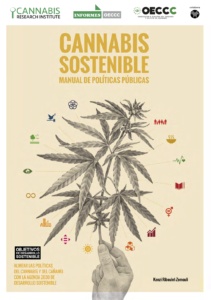